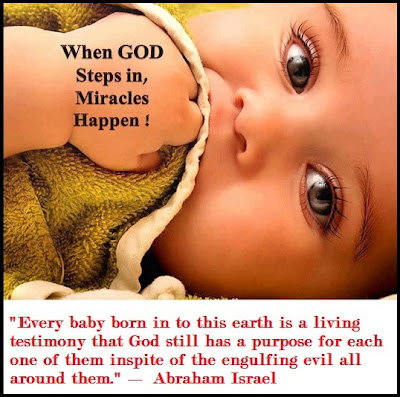 One dear Elder in my native home Church whom I know very well, has been faithful in doing the work of God for his whole life and yet had no grand children at all for many many years through his only daughter. It was a hopeless situation. God showed to me one night in a vision that they will receive a miracle in their only daughter's life. I told the wife of that elder that they will get a miracle done by God. It was very hard to believe for them when nothing substantial could be seen.

Then they went for in-vitro fertilization, and there the doctor tried a couple of times and told to them that it was hopeless at that point of time. When this wife of the elder told me about the grim situation and asked me for prayer, I told with great faith that God will surely do what He has promised already.

When I prayed for their daughter the first time, a word of wisdom came through me to say that intially it will be hard but that she should hold on in faith and not give up because God has planned to bless them.

Exactly later, the doctor told that she had no hope but that she will do the same medical procedure for one last time and confessed that only God can do something. Then when God's planned time for the miracle came, she got conceived. After a couple of months when it was told to me by the Elder's wife, I said immediately that the baby should be named, "Miracle." Then she agreed and I did not know at that time it was a girl that God had planned for her daughter.

Then miracle came to pass and I praise God for this anointed lovely little girl "Miracle" which I saw. GLORY TO GOD! Then I believe that many must have forgotten and must have doubted that it was by a pure miracle of God that she got conceived with this baby and this was made possible. To prove that God is the one who did it, I heard again recently which is hardly a couple of years after the little Miracle girl, she conceived naturally again and was given a son by God, but without in-vitro fertilisation method. God did this intentionally to prove to all that the first time the miracle happened, it was not just a medical one but a divinely ordained one through medical means. GLORY TO GOD! God has proved that whether it was through medical means or natural means, unless He decides, a barren woman can have no baby miracle. I believe that the gift of babies that God has given to this family is because of that elder's faithfulness to God.

In the same vision God had shown another faithful Elder who has been faithfully serving Him but had tremendous family problems through a young daughter of theirs at that time, God showed that they will receive His favour. Exactly as I have seen, that whole problem that stood like a mountain in their family was suddenly solved and his daughter is now happily married and living in a blessed way. This goes inline with the word of God that says, "Many are the afflictions of the righteous, but the LORD delivers him out of them all." (Psa 34:19).

Also this shows that God remembers all those who are faithful to Him in His service and will one day bless them inspite of all the problems they face in their present time, they have a bright future because it is guaranteed by God. Exactly and concisely Jesus described this scenario when He said, "If any one serve me, him will my Father honor." (John 12:26). Truly faithful people are blessed people! I pray that God might help us to serve Him more and more faithfully in the coming days like never before. And I also pray that all who read this must one day receive the days of the favor of God in an unusual and tangible way for faithfulness in serving God!