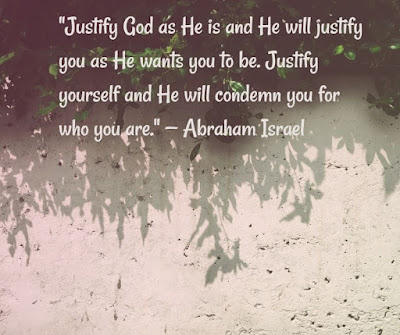 Å℘◎﹩☂øł☤ḉ ℚυ◎тℯṧ :
"A religious mindset that works for God in pride takes people directly in to hell fire, but the ungodly sinners who seek relief from mindset of sin draw near to Jesus and easily get saved through repentance and faith. Faith justifies a sinner to become a transformed saint, unbelief makes a person who think he is a saint to stay as a sinner without change! The way of faith that leads to life is narrow because only those few who humble themselves as sinners before God find it, the way of unbelief that leads to eternal destruction in hell fire is broad because every person who take pride in their own righteousness before God end up walking in it already in delusion. " — Abraham Israel
"God does work for us all the time, and yet we humans take it as a coincidence and does not want to justify God. We humans work for God sometimes, yet we want to boast of it to justify our self before God which He rejects and laughs at. Let God be found true and every human a liar, so that those who knows that they are sinners in need of the Savior to rescue them from sin and hell fire can end up perfectly justified before God now and end up finally in heaven, as they find that the one and only person who is worthy of honor and glory and praise is only God. Thus those who find themselves as righteous in themselves come to find themselves as sinners before God after they die which is too late to realize in hell which has no exit for eternity, and then those who find themselves as sinners now, end up finding God is good all the time while they are still alive. Only these sinners are transformed to become saints in Christ Jesus after which they come to realize that that they have been made as righteous before God. These humble people in the eyes of God come to find heaven earlier in their heart even before they die. Thus in the good news of Jesus, sinners find themselves very closer to heaven and enter it easily through repentance rather the righteous who justify themselves and end up in hell fire. God demands perfect 100% righteousness, only Jesus Christ can provide His very own righteousness to a sinner and turn him in to a saint in the eyes of God. This is the true faith that saves a sinner and condemns a sinner who think that he is righteous in himself before God through His works." — Abraham Israel

"Humans were not created inherently holy, but inherently innocent and had a choice to become one, but they became sinful instead." — Abraham Israel

Posted by Abraham Israel I at 1:57 AM No comments: