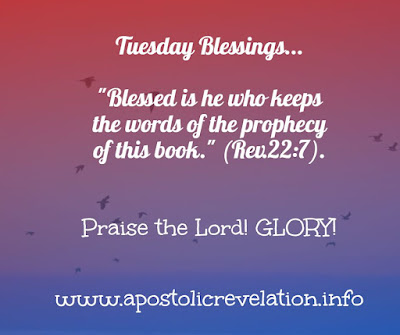 Today's Bible Verses To Ponder Over:

In times past, many great prophets and men of God wanted to know the final status and the purpose for which the whole project of heavens and the earth was created along with all the angels of God and humans as the zenith of it. They moved on in to deep things of God and many in fact they themselves began to prophecy about the end which they asked God to reveal about. But the fact of the matter is, they themselves were not able to understand the end of all things who prophesied it by the Spirit of God. When they continued to ask God about it, God gave them the understanding to understand some of it, but further God told to them that it will be revealed at the end time for the final generation who will understand it.

With great expectation of what they understood from God, they left this earth and passed on what God had told them to the succeeding generation to expect the great ending that God had for them. The day God the Son as Jesus came to earth in human avatar, he introduced a new Kingdom of heaven on earth from heaven. He lived a sinless life of holiness and power for all its citizens who would accept the King [i.e. Himself] and His sacrifice for them to receive His Kingdom of Heaven. O GLORY!

We who have now become the children of God and citizens of the Kingdom of heaven on earth, were recruited in to it by our faith in Christ Jesus the King of the Kingdom of Heaven. The apostles and prophets who were the foundation of the new system of the principles and laws of the Kingdom of God, revealed the Last Word of God from Jesus Christ to the entire humanity. The final Word of God is the New Testament which starts with the Book of Matthew and ends with the apocalyptic Book of Revelation which revealed the final purpose and the happenings through which this old earth and old heavens will vanish for the new earth and the new heaven to arise and come to place for the Glory of God. GLORY!

Let Us Pray Dear Saints of God: Dear Heavenly Father, I thank you with a thankful heart and praise you with a praising lips for revealing the final end of all things created for your Glory. In Jesus was the beginning and In Him will be the glorious end. Thank you for giving Jesus our Messiah to us. Thank you for the inspired 27 New Testament Books which came through the 39 inspired Old Testament Books. Help us not only to hear the prophecy of this Book and be blessed, but also keep the words of the prophecy of this Book of Revelation of Jesus Christ, so that we will be infinitely and greatly blessed for eternity ahead! In Jesus mighty name. Amen!

"Do not seek a in-between book when you have the final revelation of God in Jesus the Christ, who is the Messiah of the whole world so clearly portrayed before you in the Book of the Revelation of the New Testament Bible as God in the human flesh. If you think that with a puny brain, you can put a comma when God has already put a full stop, then you are trying enough to become a fool in fool's paradise of deceit and lies that leads you to death. Don't try to reinvent the wheel, when you are supposed to use the one that is already provided by God to travel to heaven." — Abraham Israel

Posted by Abraham Israel I at 9:47 PM No comments: