Today's Bible Verse To Ponder Over 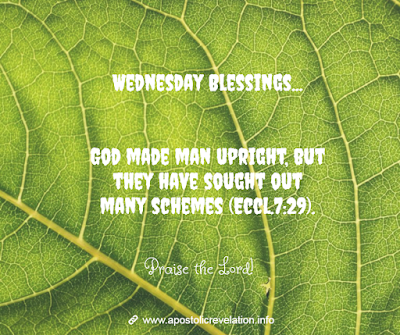 God made man upright, but they have sought out many schemes (Eccl.7:29).

Most of the time, humans blame God for all the bad things that happens in the world. Also many people try to mix such blame with questions like, 'Why should bad things happen to good people?' Still some others say, 'If God has eyes to see, and ears to hear why should injustice prevail in this world?' We know that the Bible is the only Book from which we should always get our answers for questions like these that makes us doubt the goodness of God or else all other philosophies and books does have the potential to mislead us in to wrong belief against God and his unchangeable goodness. The Bible says that intially when God created the world and placed humans within it under the surveillance of the angels to watch over them, all was upright and perfect in the world without sin. But sin was looming to come in to its helm through the result of a test that God was about to keep for human beings to choose the way of God or way of self before them as a choice. God wanted humans to be holy as He is holy. Why test? Because only a test could prove a man to choose holiness over sin by His own choice a he was created in the likeness of God. In fact, If Adam and Eve would have chosen holiness instead of self and sin, they would have lived forever with eternal life received from that time onward itself.

Many people ask why should God ever test humans if He already knew that evil will spoil the world or that man would fall in to sin? God wanted man to have a choice and not work as a robot inspite of the risk that man will choose wholesale to totally deny Him even the rights to rule over them, that is why He created humans in the likeness of God of which those who voluntarily choose Him as the ruler over their life would give so much more pleasure, which points out to humans that we have a choice to make but the result of the choice that will come to us, we will not be able to deny it as God has set the law of sowing and reaping in to existence in the whole universe. In other words, humans who sow good will reap good, humans who sow evil will reap evil. Those who sow evil will be judged by fellow human court, by rightful curse from angelic realm which God allows, and by God Himself who intervenes now and then in the world of people to work according to His purpose and then judge the whole world for its evil once at the end of the world. So Adam and Eve who were innocent, when God tested them, Adam gave heed to his wife rather than to God. Eve gave heed to Satan the serpant, rather to her husband Adam. Thus from that day by a conscious choice, man sought out many schemes by his fallen sinful nature rather than to accept before God his sinfulness to get redeemed by Him and receive His eternal life to have friendship with him to live a life of faith and godliness.

Godliness is a mystery, and that mystery is revealed by faith in God. Bad things happen to good people, because we live in a sin cursed and a fallen world where self of humans seeks schemes rather than the solution that God provides by faith. Faith sees through the mist of unbelief and doubts of this world and hears the voice of God and walks exactly according to his desire and instruction to please Him in all things. Self hates and mocks God's ways like Ishmael mocked Isaac when he was weaned through a celebratory feast as he grew up. In the same way, our self laughs at God's creation of the new man who is being weaned and growing up, instead of laughing with God rejoicing over the maturing spirit-man that is the only legal heir to rule over us as the sole owner of our body. God has eyes that see and ears that hear, but the judgment for sin has been appointed by Him through physical death of humans and after that his justice will get fulfilled on the day of Judgment, i.e. the last day on the White Throne Judgment. So for every schemes that humans have been involved in to bypass God's righteousness and judgment and justice to establish their own will be angering God who is angry against the wicked everyday. Sin is choosing self over seeking God through faith. But the good thing is that God is longsuffering, so He waits for all humans to repent from their sins and bad deeds, so that by believing in Jesus they have the opportunity to become as his sons, so that they can choose to joyously and gratefully continue to serve Him through righteousness and justice which is the very foundation of his throne. Now in the life of humans, the law of sowing and reaping is at work. When we have gravity at work on this earth, it applies to all humans whether someone believes it or not. If a person falls or jumps from a aeroplane, he needs a parachute to save him from imminent death. Like wise like the parachute, all of us whose lives are out of control by sin and feel the need to seek God to be upright, must believe Jesus Christ to save us from imminent death and live for the Glory of God. The law of faith in Christ Jesus which help us live in God's righteousness and uprightness supercedes the law of sin and death that we all live through self and religion. At the end of it all, only Jesus satisfies!

LET US PRAY DEAR SAINTS: Dear Heavenly Father, I thank you and praise you for making me upright in Christ Jesus. But as our forefather Adam chose self over obedience to your Voice, death has invaded us to cause fear and make us seek schemes instead of seeking you for the solutions we need to live life abundantly. Thank you for sending Jesus Christ the Son of God to die for us and redeem us from sin so that we can be perfectly aligned in your will and purpose to seek you again with our whole heart, strength, soul and mind. Help me worship you alone all the days of my life and live uprightly to serve you for your Glory. In Jesus wonderful name. Amen!


Posted by Abraham Israel I at 5:44 AM No comments: