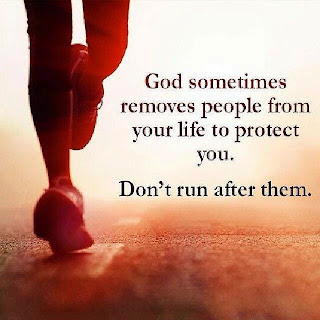 Å℘◎﹩☂øł☤ḉ ℚυ◎тℯṧ :
"Every person who runs away from you for no reason from your side, should be committed in to God's hands for you to forget it and move on with your life. God must have removed them from your life so that you will not run after them and ruin your life, but rather run after God who has a amazing purpose and a glorious future for you because He loves you to death to bring His glorious heaven's life back in to you. Do not ever try to run after those people whom God has removed from your life because it is very injurious and dangerous for your spiritual life, so understand to let go to stay under the umbrella of God's heavenly protection over your life. People whom you lose on your track in running after God, God has not just a better one but the best one He is bringing in to your life to bless your life immensely now and for eternity. By the way this word is not just for young people seeking life partners, but for friends, families and applies to every area of our lives which is under the constant surveillance of God. Whom God brings will be blessing to you and you too will be a blessing to them, whom you run after will bring problems of curse and more curses to make your life a miserable living hell on earth. Seek God's best and leave the rest for the rust, then you will live the rest with the best in your nest!" — Abraham Israel

"When you are dead to sin, you do not have to die in sin. Sin thrills but at the same time it kills your abundant life. Run away from sin before it controls you to make you run to sin. When you love Jesus, He will help you hate sin. God hates sin because it destroys you whom He loves the most. Sin might cause storms of unbelief in your life to make you sink, but do not worry as Jesus who is in your boat will make that storm become calm as your speak against it to cease by faith. Sin will bring shame to anyone irrespective of who it is, but God's righteous way of living by faith will bring exaltation to your life now and forever." — Abraham Israel

"No true born again Christian can sin without feeling miserable inside his heart, because the Holy Spirit will convict him to look to Jesus and confess his sins one more time to again be cleansed by His blood and washed clean for a holy living. Grace empowers us to overcome sin when faced with temptation, and if in case we fail in its first attempt towards us it gently lifts us up to empower us to make us stand in God's holiness again if we have fallen down. Grace increases when sin increases because the grace of God reigns over sin always as long as Jesus is the focus of our lives. Grace comes from Jesus to us as long as we keep our eyes fixed on Him as He is the source of it. If we think that if we go on sinning grace will increase, actually we are deceived and we have not actually experienced the true grace of God that makes us overcomers over sin. Faith always makes you a overcomer, so keep believing God's promises until you experience true grace of God that overcomes sin in every area of your life!" — Abraham Israel

"When the infinite God who made Himself to become a finite human by His own choice to die for our sin and rose up on the third day to reign over this earth forever, from that moment onwards the infinite reference point of God became revealed to us and have been understood by us in this finite earth life of time and space to inherit that eternal life of God from which the reference point of infinity got imprinted in us to live as His children. The infinite God can only be understood when we seek Him from His reference point in Jesus Christ, who gives us all a glimpse of eternity on earth and takes us to experience it after we leave this earth to be with Him in heaven. Unless God reveals it, humans cannot understand it because eternity starts with God and ends with Him. As a finite humans to have meaning in this life we must start with the infinite reference point of God!" — Abraham Israel

"Our true spiritual worship towards God does not really start inside the four walls of the Church but it actually starts with us willingly giving our whole body, soul and spirit as a place for God to dwell, live, move and have His being expressed through us. We are the temple of God now in which the Lord is with us, and He has given us an opportunity to give our whole being as a living sacrifice on earth, so that when we die we can go on to be with the Lord in heaven where God has promised to give us His whole being as much as we have given ourselves to Him on earth. Those who have less of self now on earth, will have more of God in heaven. Those who have more of God in heaven are those who will be honored and glorified more, unlike on earth where self honors and glorifies itself. Let out prayer be, 'O Lord increase in me in such a way, so that self might decrease to none in me.'" — Abraham Israel

Posted by Abraham Israel I at 1:40 AM No comments: