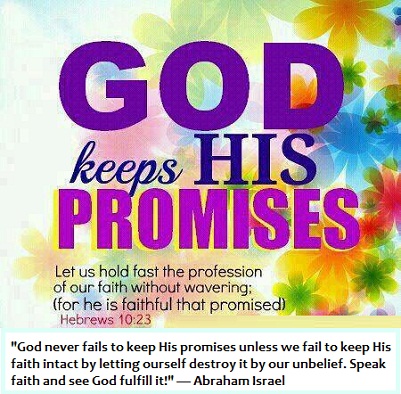 Å℘◎﹩☂øł☤ḉ ℚυ◎тℯṧ :
"God's promises are all ready to be fulfilled for all those who are ready to believe it personally, as Jesus Christ has already made it possible for them to be blessed if only they mix the word of God with faith and patiently wait until God fulfills the promises of His in His time and for His glory!" — Abraham Israel
(¯`'•.¸**† ALL OF GOD'S PROMISES ARE YES** (¯`'•
(¯`'•.¸** IN THE NAME OF ** (¯`'•...........
░░░█░█▀▀░█▀▀░█░█░█▀▀░** (¯`'•
░█░█░█▀░░▀▀█░█░█░▀▀█░ AMEN!•.¸*♥*
░▀▀▀░▀▀▀░▀▀▀░▀▀▀░▀▀▀░♥...........
"No matter which nation honors the law of God it brings them exaltation. No matter which nation breaks the law of God, they end up being a reproach to the whole humanity. When sin is entertained in any society, soon they get disintegrated to become inhuman enough to act like animals. Sin is like a cobra that dances as the government of various nations act like a snake charmer to make their people who are living within their sphere of influence to be entertained. But there comes a time soon, as the cobra starts to end its so called dance, it starts to spit venom upon all those people who are watching it and have been involved in the whole drama to first make them blind towards God and then leading them to death at the end. Sin thrills but also kills at the end. No nation can ever be involved in gross immorality and then can escape the consequence of God's curse upon it and its people. God judgment may delay upon a erring nation but it will surely come in His time for all unrighteousness that has been done through them. May God help us all in whatever nation we live to be a light in the darkness, to shine upon the people who live in the spiritual darkness of sin with a righteous life style of radical light of holiness that comes through the grace of our Lord Jesus." — Abraham Israel

"The theory of evolution is the biggest lie ever told to spiritually and soulishly dumb people who believe its foolishness, they start with monkey and end with humans. They assume that so called half monkey half human cavemen are the in between fillers who had got transformed to become civilized men. The question to be asked is, if such humans apes were the connectors between monkey and man, where are they in our present earth? Have they not reproduced one of their own shape until now. The are not because the Bible says that monkey's were created in its own image and only humans were created in the image of God. Even if there will be a million years of scientific advancement, as long as God exists no monkey can become a human because the seed of the monkey is given the power to reproduce only of its own kind. God has crowned humans with the power to reproduce only of its own kind and fill the earth with their off spring to rule over it, that is what has been happening all these years of human existence from the beginning of creation. No monkeys have ruled over humans till date in history, but humans all through the history have consistently ruled over the animal world. This shows that God and His word have not changed since creation, but only man's mind has got so filled with unbelief and have got so degenerated that man has chosen to believe that he has come from monkey. May sanity return to the minds of people who choose to fear God, believe God and His Word rather than their feelings, opinions and deception which comes and goes based on the information that has been accumulated by limited human experience and demonic instigation of unbelief towards God and His unchanging Word. Trust God even when you don't understand, then you will experience the reality of truth by conviction. A man of conviction is like a man standing on a eternal rock that is unshakable because he is actually standing on God, a man of logic without conviction is like a waterless cloud driven by wind which moves here and there, but without having any definite purpose in its movement. May your eternal conviction guide you in to eternal reality of truth that comes only from God!" — Abraham Israel

"No gain without pain is also equally true in the spiritual world of faith as it is in the physical world of fitness, where the saints tread the paths of suffering to gain that which has been prepared for them from the beginning of the world which is God's kingdom power and reward. We do not work to be saved as it is a free gift of God that has come to us when we believed and received Jesus as our Lord and Savior. But the eternal reward we gain after we are saved is through serving God with patience in all the situations of life which God has prepared for us to walk by faith. When things annoy us, we should remember that annoying things will happen to us before we begin to become a anointed thing, so by standing on the promises of God, the Word of God should be mixed with faith and continued to be held patiently within our hearts until God's appointed time, after which we inherit at the end, things which were promised to us by God. Suffering for God might be just for a season in our lifetime, but the joy of the reward that we inherit through it will stay with us for eternity ahead! O what a privilege that God has given to us who are His children! The reward that God gives on the payday is always greater than the little work of faith we do for a little while in our lives. You cannot invest in God's kingdom anytime for a loss." — Abraham Israel

"Faith that is strong will have its entire focus not on what a person can get from God but what he can give to God and be pleasing to Him through his obedience to Him. The greatest test of faith comes to a person when he knows that God has promised to give him something for sure and yet he sees that what he is believing is not even in sight for their lifetime. Delay of God are not His denials, instead it is a sign of His delightful approval for better things. God delays to give what He has promised not to make us disheartened with discouragement, instead because He wants us to become strong in our faith which will make us a eternally blessed person in favor with God. When through the process of our faith journey, if we are developing our relationship with God rather than narrowly focused on the end result, soon our realization of God's love and our love for Him will cement a intimacy with God that will empower us to make us able to say, "Thank you Lord for drawing me to yourself," because of the blessed satisfaction that comes from the Presence of God. Faith in itself apart from God has no real value, but the God who is pleased by our faith gives it a stamp of eternal honor as we carry it with an intention to please God and not just use it as a means to an end. Strong faith are wrought by strong test where the fuel to finish it comes from the fact you know God intimately through the process who supplies all your need in Himself and not apart from Him. Praise God that He supplies your need and not your greed, because if He lets you have what you want out of greed, you will never ever become a blessed person with eternal favor of God over you life. While in the natural you want to see temporal satisfaction through things, God just wants to draw you out of temporal satisfaction that comes through acquiring things which vanishes in time and satisfy you eternally with Himself which will never end." — Abraham Israel

Posted by Abraham Israel I at 4:59 AM No comments: