Manna for the Day

The Greatest Wonder Of This World 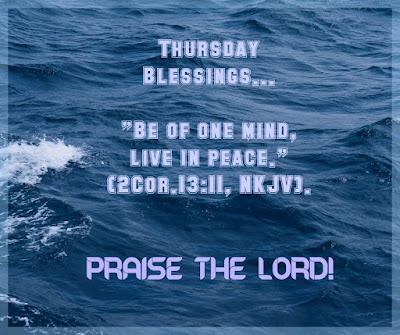 "Be of one mind, live in peace." (2Cor.13:11, NKJV).
The greatest wonders in this world are not the engineering marvels around us which can always be superseded by something else in a matter of time, but it is the Church which has so many nationalities, races, faces and masses but still co-exist as one universal Body of Christ. The reason we are able to co-exist is in itself is a miracle that is progressively realized more and more in this globalized world in these end times. What makes us co-exist with one another in the Church which makes a perfect university of education to live in unity within diversity?
The secret is not just education, because many believers are uneducated but God has chosen mostly the foolish things of this world within the Church to shame the wise. It is our mind which is controlled, renewed and established in "one faith, one baptism and one Lord" (Eph 4:5), which brings a universal appeal to the simple and local members of any nation and in any area of the world. Suddenly their mind shifts from being a local and nationalistic thinking to a universal thinking of the Kingdom of God to become a global person who has a citizenship of their localities in their respective nations of the world, but also gain a dual citizenship from a heavenly kingdom of God which will rule the world to come (Php 3:20-21).
Why do Christians remain not vengeful against people who try to hurt them around the world? Nowadays they become soft target for terrorists around the world, Why? Because they have one mind to live in peace within themselves and also others around them because they know for sure that a Kingdom awaits them, and that they do not have to fight for it to be established on this earth. Then they do not take revenge, because they believe that God defends them and takes vengeance in His time. God is the one who has already established a control tower in heaven to have one mind and will soon take over physically this world to rule it for a thousand years through Christ Jesus and the Church. Just because the Church is meek does not mean it is weak, but rather it is the strength of mind within them that conquers the world without vengeance. So let go and let God in prayer to receive His peace to rule in your hearts and minds in Christ Jesus today. Renew your mind by the Word of God which is our Kingdom manual for prosperity and security, to let the peaceful thoughts of the mind of Christ to reign within to walk in the will of God which brings peace irrespective of the situations around us.
PRAY WITH ME SAINTS: Dear Heavenly Father, I thank you and praise you for helping me be a part of the universal miracle of the Church. Establish the thoughts of peace within by giving me wisdom to let the thoughts of Christ take root within me. Help me not to react but rather act in love towards people around me even when they walk in hate, because vengeance belongs to you but responsibility not to react belongs to me for which you will honor and reward me for eternity. Thank you for Jesus Christ our Lord and Savior in whom all good things will come for eternity ahead! Praise you in Jesus name, Amen!
Much Blessings...
»-(¯`v´¯)-»( [ www.apostolicrevelation.info ] )»-(¯`v´¯)-»
"God has a universal miracle established in the Church, through which He will shown His goodness forever and ever. Just live thanking and praising God to enjoy His benevolence and exceeding greatness of His power toward us who believe, according to the working of His mighty power." — Abraham Israel

Posted by Abraham Israel I at 1:40 AM No comments: