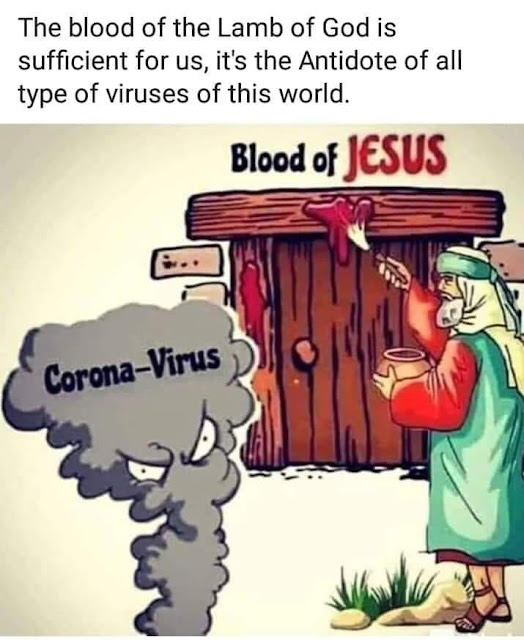 
"Corona virus is just a name, but there is a name that is high above all names in all the universe, it is none other than one and only name of our Lord and Savior Jesus the Christ. Make sure your faith in His name and in His person and power with which He rules over the whole universe from heaven stays intact in your heart and soul, so that we who are in Him remain cleansed by the protecting blood of Jesus always at all time. So that God may be able to show the difference between us His people and the pestilence that stalks the Egyptian unsaved world in darkness where the plague of global Corona pandemic is reigning through terror of fear in their heart to be ready to destroy all at midday. Jesus is not just a antidote to Corona, but is the one way to abundant life on earth and eternal life hereafter! We as believers through faith who are under the shadow of God's wings should remain in His protection to be a testimony to the unbelieving world in need. When we are in the perfect will of God through our faith in Christ Jesus, our very presence on earth will make a difference in this world! You are a world changer as you remain in faith for the world to see." — Abraham Israel

"The fight is never between Satan and God, rather it is a fight between self or God. Wide gate and broad road that leads to destruction is unbelief and selfishness. Narrow gate and narrow road that leads to life eternal is faith in Jesus Christ and sacrificial life of trust and obedience to the Word of God. Hell is a place where people will find for the first time what it means to live without God and the goodness that accompanied them on earth unconditionally. God does not send people to hell, but they choose it because they choose to live for themselves rather than the God who created them for himself." — Abraham Israel

"Jesus is the greatest man in history, because history is actually HIS-STORY. You can divide the world only in to two time frame, one before His birth, death and resurrection, the other after it. Jesus is not just the Lord of all the Christians, but the whole Universe. But Christians accept the truth humbly and become a child of God today to end up in heaven, others reject it to end up in hell and only realize it later. It is better now, than to be late forever. We can accept the truth that 'Jesus is Lord', or reject it now, but we do not have the power to accept or reject the consequence of the result of it now and forever. Truth prevails at the end without fail, if we believe the truth we too will prevail at the end or we will only wail and never prevail! All will be well that ends well, especially this is true when it comes to believing the truth or rejecting it." — Abraham Israel

"God has not gone in to a sleeping mode as the Word of God says that He neither slumbers, nor sleeps. He can help and keep the one who sleeps in the one side of the planet as well as the one who is facing the noon day work at the other side of the planet safe from all harm if they have learned to live under the shadow of His wings by trusting His promises. We can be sure that God is in control of the whole world at all times, he cannot ever be taken by surprise because He knows the end from the beginning. He cannot be said to be absent at any time in any place in all the Universe because He is the first as well as the last to leave any place which means He is omnipresent at all times. We know that the world system is being shaken to the core as corona virus, climate change, locust invasion, economic depression, political turmoil, etc has been on the rise in our planet earth like never before. If we are only in the times of sorrow as the Bible has already predicted and humankind is not able to bear the stress of the times, how about the soon coming days and years in which the wrath of God will be revealed in His fury and fire for the sins of the world during the unprecedented GREAT TRIBULATION that the Bible talks about. But there is a way of escape from it for those who trust in Jesus Christ and are saved from sins to be careful enough to WATCH AND PRAY, they will be Raptured to the new heaven and earth that Jesus has prepared for them. You and I can be part of this greatest story to make His story ours and thus make History if we continue to believe the promises of God. My best wishes! Hallelujah!" — Abraham Israel

"To fear is not a crime as long as faith overcomes it at the end of it all through trusting the Word of God. If we let our own feelings that come and go to control our lives to make it become unfruitful spiritually, we are to blame none other than ourselves. Let go off fear, and let faith come in to make you victorious in all dangers and all situations for the Glory of God!" — Abraham Israel
☢×÷•.•´¯`•☠)»( www.apostolicrevelation.info )«(✞•´¯`•.•÷☣