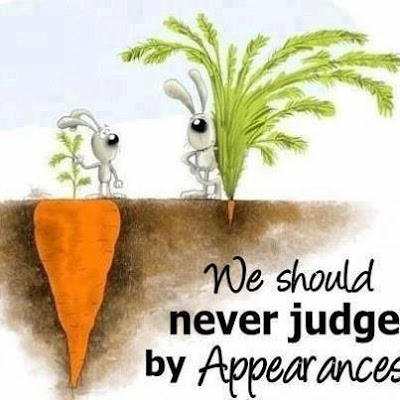 Å℘◎﹩☂øł☤ḉ ℚυ◎тℯṧ :
"To judge someone based on how they look, behave, speak, walk, talk and the dominant cultural trait they come from is the worst spiritual act of error we can do to someone because when we do it, we have totally forgotten that all the believers are the new creation in Christ Jesus our Lord. God sees the finished product in His mind even before it get completed, the way people will be transformed at the end of their lives is the way we should see them in the present because God who has started to do a good work of sanctification in their lives will one day complete it. Jesus never judged anyone neither by the sight of His eyes, nor by the hearing of His ear, but with righteousness He judged the spiritually poor and decided with the quality of being just, impartial, and fair towards all the meek of the earth. The spiritual qualification for judging others is to have a quality not to judge anyone based on what we hear or see but with what God says them to be. When we are tempted to react to the things we see and hear in the natural realm, we should commit that judgment to the Lord, because God has promised to take vengeance on the unjust and evil men in His time of retribution. The best way to demonstrate the right spiritual judgment in judging others is to judge by standing with the Father God's opinion which has been revealed in His word and not by what we see or hear naturally. Appearance can be deceptive, when human motives remains the driving force of all human actions. So without hearing God's voice, never dare to judge on what you think is the right or the wrong decision, because no one knows the motive behind the actions of people except God." — Abraham Israel

"To love one's enemies is the one unique thing that Jesus Christ challenged all His followers to do as He knew that it is impossible to do it without the strength that He gives. Jesus said that without Him, His followers can do nothing valuable to God and His purpose. He wants His followers to be attached to Him always as like a vine is attached to its branches without which they will get dried and dead. No other religion in the world ever speaks and exhorts anyone to love their enemies, to bless those who curse them, do good to those who hate them and pray for those who spitefully use them and persecute them except Christianity because in it Christ gives the power to do that which is impossible to do. Nothing is impossible with God when you have Christ within you who positions you in God's favor which continually strengthens you! Learn to love, then live and let live." — Abraham Israel

"A scar is a seal of honor for the warriors who fought and never gave up in life, a scar reminds us that we never gave up in life even when we were faced with a crisis of great proportion. We also learn the lesson to avoid the evil and overcome it with good the next time we face such a crisis. Jesus was such a warrior who fought against all the demonic powers single-handedly and died on the cross in the will of God overcoming all of them. But the warrior's scars still remain even in His brand new glorious body and will remain as it is for eternity ahead as a remembrance of His victory over all evil. May we never be ashamed of the scar that we received in our fight for God's glory because it simply means that we have become stronger than the evil that tried to hurt us. May we be like Jesus our Master finish our fight in victory of faith which leads to eternal honor." — Abraham Israel

"Gift is what a man makes out of it, but character is what makes a man." — Abraham Israel

"Don't settle for the good, when you can reach for the best." — Abraham Israel

Posted by Abraham Israel I at 1:46 AM No comments: