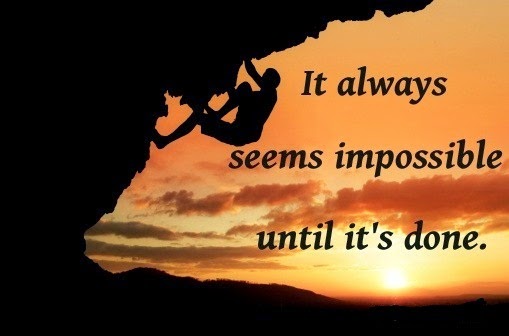 Å℘◎﹩☂øł☤ḉ ℚυ◎тℯṧ :
"Impossible is nothing as long as you can see a possibility in every seeming impossibility by faith, to see not what your future holds but rather to see the God who holds your future, and believe that He will hold you faithfully to achieve what people see as an impossibility because of their fear to sustain themselves. Never try to prove yourself to any people around you no matter whether they are far or near to you, what matters most now is that when you try to please God, He will prove Himself through you to all your critics in the right time so that they too might desire to learn this lesson for themselves to be blessed." — Abraham Israel

"Satan's greatest deceit comes through lying signs and wonders which are nothing but genuine one packed with lies which will direct you towards a man or an idol and everything else except God. Satan has servants who have sold themselves and their opportunity to get saved for money and earthly pleasures, they will always show a false pretense on the outside speaking the right words about God but in a wrong way to appease their own conscience and the conscience of their devotees whose motive will be nothing but more money and get rich quick on earth. Any angel that doesn't preach the gospel of grace of Jesus Christ is not a good one, but a evil one who wants you to be deceived and side up with Satan's purpose of destroying God's children and their peace on earth. Those who are not with Jesus confessing Him as their Lord and Savior are actually against Him, because God has already clearly revealed in His Word that those who have the Son also have the Father and life eternal with them. Beware of going after signs, wonders and miracles and not after the God who created you for His own purpose, because God is in the process of filtering the genuine believers in Him from the false one through the filter of excitement, fun and fanfare spirituality of lies that are at loose at the end time before the Rapture takes place to take us all once and for all to the place prepared for us in heaven. For genuine believers, they will not follow signs, wonders and miracles but rather will follow the God of all signs, wonders and miracles who will make all those things follow them without fail to bring Him glory now and for eternity!" — Abraham Israel

"When you come to realize that you are unfit to receive God's blessing if not for Jesus, you will be made fit by God to come under His gracious hand of favor because of your realization of your inability to earn God's favor and His ability to provide freely of His infinite wealth that never ceases for eternity. When you least expect to receive anything from God because of your unworthiness, that is when God's favor will surprise you because of His worthiness to bless you. God's favor will work positively for us as long as we will work for Him with whatever we do in our lives, but with a humble heart attitude that will deny any place for negativity which usually comes and dispositions us away from God's favor because of our lack of thankfulness for what we have received from God even though we do not deserve the least of all those things that God had freely given to us." — Abraham Israel

"For those of us who have walked through hell and high waters for the past one and half decade within the will of God, WHAT THE ENEMY HAS DONE IN OUR PAST LIFE TO DESTROY OUR DESTINY, GOD HAS PROMISED DOUBLE FOR ALL THE TROUBLE which denied us from living in the promised blessing of God that He had originally planned and promised for us. If you believe that this word from God's Throne is for you from this year 2015 onwards, say AMEN. AMEN!" — Abraham Israel

"It is not in God's will for you to be defeated, depressed, delayed or even destroyed before time from reaching His preordained destiny for you, but it is the will of Satan that he wants to fulfill it in your life through making you active in the will of your own by letting you to rejoice in the flesh rather in the Lord to make these things happen in your life. Remember God gives victory after every defeat, joy after every depression, beautiful bonus and surprises along with the reward after every delay and finally He turns the curse of destruction from the enemy in to a eternal blessing for us and our family when each time after such ordeals if only we will choose not to stay with in the pit and net of the enemy but will choose to rise up and come in to the stronghold of faith where the Blood of Jesus will cover us again to makes the enemy of our soul flee away from us. Even though we fall and fail God is the one who makes us rise up, who can stand against Him when each time He does that to us because we are His loving children of His glorious care. O What a Glorious God we serve!!!! Praise the Lord! We are created to be victorious and our victory is faith, faith is the victory!" — Abraham Israel

Posted by Abraham Israel I at 6:49 AM No comments: