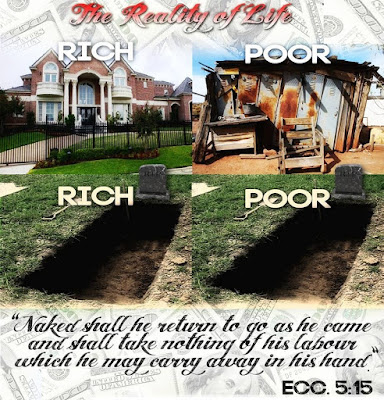 Å℘◎ṧт◎ℓḯḉ Їη☂℮ґρґℯ⊥α☂☤☺η :
WHAT DO THE RICH AND POOR HAVE IN COMMON?
"The rich and the poor have this in common, the one Creator God who created them is the One who rules over them all." (Prov 22:2, Abi's Translation).
Many of us do not realize that the same Creator God who created the rich and the thriving have also created the poor and the crying for His Glory. Is there not inequality in this world? For a fastest growing large economy like India, the 75% wealth of the entire country is held in the hands of the one percentage super rich, and the other 25% of the wealth is shared by the seventy five percentage of the whole country which includes the so called middle class, laborers, poor and the dying. Why is there so much of injustice in this world? Why does a just God should allow this to happen?, etc... may be the million dollar question that many would like to ask.
But let us see the truth and face the hard facts. When God says that He is the One God who created both the rich and the poor, it does mean God is taking responsibility for first of all allowing the difference and inequality between them. But God did not directly do this, He created all humans in the image of God without any inequality among them through the first parents of the whole world, Adam and Eve (Gen 1:26-27). Then when Adam fell in to sin disobeying the command of God, all humans fell in to the base nature of sin irretrievably(Rom 5:12). But thank God, because of His mercy, grace and benevolence, those who sought Him were given a opportunity to live richly with God's friendship now and hereafter through Jesus Christ the Son of God. So God proved against all odds that though He has allowed inequality in the world for a better cause of making people seek for a eternal solution in their life, still the 'eternal life' package of friendship favored the majority of the poor rather than the rich (James 2:5). This is the reason Jesus said, "It is very very hard for rich man to enter heaven, because his heart trusts in his wealth instead of the God who gives it for the benefit of all. 26 Yes it is impossible for the rich man to save his soul with whatever wealth he has, yet it is possible with God to save him." (Matt 19:24, 26). Praise the Lord!
In other words, the perfect God of justice is still rooting for equality in this world so that wealth of this world can be shared by all in love, unity and joy. The problem the Lord God is dealing with humans now is not the fruit of sin, but the root of sin which is their unsaved nature that influences them to act selfish, consume the abundance or even waste it without sharing, amass wealth instead of utilizing for the benefits of fellow humans. But God saves man from sin through his belief in Jesus Christ, and is giving them a new nature to make them live as a new creature in this earth. O praise the Lord! So now we as followers of Jesus should learn to share what we have with others, and create equality among all races, color, status, etc...So Christians don't blame God still for the inequality, you make the difference as salt and light in the lives of people. In other words, God favors the helpless poor, but gives a liberal opportunity of blessedness to give freely and thus learn to trust God. Thus God has equaled the inequality of the richness of some in the world, with the spiritual favor that is easily attainable for the poor and the crying just by the realization of receiving the good news of the gospel which is the special spiritual package for the eternal benefit of the poor which is named as 'eternal life (Matt 11:5; 5:3).' In other words, while rich men will find harder to receive the spiritual blessings, the poor are favored with nothing but God Himself as their defender and gift for eternity ahead (Matt 1:23). Just as our Lord and Savior Jesus Christ revealed, "It is more blessed to give than to receive." (Acts 20:35). When the rich become richer they receive the reward for their lives, when the poor becomes poorer they call on the Creator God who does justice to them (Rom 10:13), without fail they get saved and receive the gift of the eternal insurance of eternal life (Rom 6:23). So when the rich approach death their suffering starts from the grave (Luke 16:25), but when the poor and the crying approach death with faith their comfort and prosperity starts from there on. Truly our Creator is a JUST GOD!
Much Blessings....
<º))))><.•´¯`•.( www.apostolicrevelation.info )¸.•´¯`•.¸><((((º>

Posted by Abraham Israel I at 8:31 PM No comments: