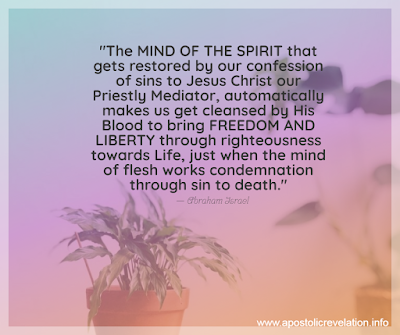 Å℘◎﹩☂øł☤ḉ ℚυ◎тℯṧ :
"The merciful and gracious hands of our Lord is never shortened, until and unless we fail to take hold of it boldly in our time of need with confidence of faith!" — Abraham Israel

"God loves us not because we are good, but because we are His loving children who deserve His Love, even though unworthy as we are in ourselves without Him." — Abraham Israel

"The Gospel is all about the ever Merciful Father forgiving his unworthy sons often and celebrating along with them whenever they have repented of their sins to embrace the Love of the Heavenly Father. Confession is only a part that restores fellowship with Him back, but repentance in its entirerity starts before we get saved and properly ends only when we leave this earth to meet the Lord God our Father in heaven face to face. Ever time we repent, we will experience a times of refreshing party within our spirit tangibly, even as we join the party of great celebration in heaven with the Trinity and angels." — Abraham Israel

"A warrior of faith in the Kingdom of God may not be know to men always on earth, but without doubt hell's kingdom of darkness will shudder at the mention of his name, even though he may not be perfect as such a person is hidden in Christ for Him to be revealed to them in His Glory and Power which they cannot withstand even for a moment of time." — Abraham Israel

"God can only humiliate us but it is up to us to humble ourselves before Him always, so that He could make us see great and wondrous things with our inner spiritual and supernatural eyes which we could never ever see with the limitations of our natural eyes if we were not able to stay humble through our stumble of life, which God constantly brings on the way of those who are called by Him and love Him. Apostle Paul's vision of meeting Jesus blinded his natural eyes, so that His inner spiritual eyes could be opened up through three days of fasting and praying. Once it was opened, still he had that eye problem persist in his life which humbled him even though God worked unusual wonders through the hands of Paul. Can you imagine the mockery of those who would have pointed to Paul's thorn in the flesh and say, if he could not heal his own blindness how could he heal others who have physical ailments? But the irony is, God uses weak, broken and humble children of his who take his hand to walk in to darkness, rather than to walk in to the mid-day light without Him, where He will be the one and only one who will be glorified greatly through His children. When we humble ourselves like a little child before God, in His right time He will lift us up and establish us in the high places of His Glory." — Abraham Israel

Posted by Abraham Israel I at 7:49 PM No comments: