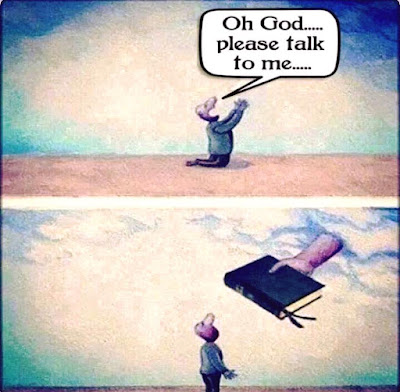 Å℘◎﹩☂øł☤ḉ ℚυ◎тℯṧ :
"When you do not wisely choose to master the Master's words of life given to you through the Bible, do not expect God to answer to your whims and fancies. God speaks through His Word mainly to honor it above all even above His name, though He can speak in a million different ways He chooses. God is speaking through His Word all the time even when we choose not to hear him, are we taking enough time to hear Him speak to our heart! Bible is not just the written word of God, but rather the very will of God for our lives for which we are accountable to God of how we have used it, and how much we have believed it even until the end of our earthly lives, and therefore receive the reward for using it awaiting in our heavenly lives. You cannot believe more of God, until you come to learn more of His promises!" — Abraham Israel

"The counsel of the wicked thrives in focusing upon oneself and their limitation and take it as the absolute way of life for themselves, when God in fact is waiting for them to turn from their limitations to look in to His limitless heavenly resources ready to be dispersed to them if they are willing to come to Him in faith. God is beyond religion, nationality, color, caste, and all other man made things, as He is the one who looks in to the heart of all humans to have personal relationship with them for the rest of the eternity. Christianity is in essence a very private relationship with God, that automatically shows itself as a way of life outwardly for a public relationship to be developed with others to show them the private God whom we have encountered, whose goodness and mercies are so immeasurable that we cannot contain to ourselves except through sharing it with others for the Glory of God! True Christians will be present in all nations as long as sinful humans will exist seeking for salvation from God for their sins in any nation though it might be even just a remnant. If no humans are ready to spread the good news of Jesus Christ who speaks from heaven and who had come to all humans in need of salvation just because of the reason that the earthly government denies them on earth the permission to spread, God then will send His heavenly angels to finish the job and none on earth can stop them. Thus God will step in to any nation to reveal Himself to those who will seek Him because He owns all the earth and He needs no permission or asks anybody before He steps in to the lives of people to transform them for the other world He has prepared for them. Those who ask will receive, those who seek will find, those who knock the door will be opened to them!" — Abraham Israel

"You seed for greatness and royal living is something that God has already well planned and put within you even before you were formed in your mothers womb, all you need to know is to recognize it and nurture it until you become one. Glory to God!" — Abraham Israel

"Sometimes when we think we are safe, comfortable and bored with the routine, that is when the enemy attacks us suddenly, because we have forgotten and tend to forget that the Presence of God gives us vigor, satisfaction and comfort to take us forward in the past times, and He is the one who will take care of us as He has been taking care of us even to the present moment and to the end of our life on earth in the future and thereafter. Fall before the feet of God by being abandoned of yourself everyday in your heart, He will make you rise up like a sunshine to its zenith everyday, though darkness may prevail for sometime. The Christian life is not a all time high always, rather it has highs as well as lows where we need to surrender ourselves to God beyond our understanding, to this God who knows what is best for us, and who controls even to the smallest details of the most insignificant thing to us, like for example without His permission not even a bird falls to the ground and likewise not even a hair on our heart falls to the ground because He has numbered it all beforehand. But it can be made in to a high time for a life time for all those who choose to fall at the feet of God lowly when things are good, bad and in-between to thank and praise God for being good all the time, though they might not have been able to realize it all the time. That is why when we bring ourselves to the lowest before God, that is when God lifts us to the highest before men! When we fall at the feet of Jesus which shines like burnished bronze which represents God's judgment of nations for their sins of omission and commission, then we get excluded from it but only get chastised because of His great love for us now to be justified forever later. God is good and His mercies endures forever and ever especially to His children. Hallelujah! Praise the Lord!" — Abraham Israel

"When we became empty because of sin being far away from God, God saw us and felt pity for us and sent Christ as a perfect sacrifice for us at His appointed time to redeem us from sin, Satan and death of separation from Him. When we were able to believe on the day of our salvation and chose Him to accept Him as our Lord and Savior, God foresaw us and we were in the mind of Jesus Christ when He hung on the Cross for us two thousand years ago to make us realize how empty we are without Him. In His pity God looked with kindness and compassion towards us as a father toward his child, and chose us in Christ Jesus. Now we are called to live full for God and die empty with God so that we could never cease to be amazed by the great grace, kindness and mercies that the Lord chose to show to us all who are saved for the Glory of His name freely! If you do not look to him now daily, you will continue to live empty and die full of the world which makes you live without the love of the Father in heaven which never satisfies your soul and leaves you in arid desert. Because God chose you before you chose him, and you just cooperated with Him to get saved by the choice of your belief, trust Him day by day more and more to receive His goodness because of His benevolence towards us that has been guaranteed on the Cross. God is good all the time, not just because you feel it or say it, but rather because of His wonderful unchanging nature of His goodness towards us all who have believed Him and His promises, to all of us His children He never ceases to amaze us all the time with His abundant grace!" — Abraham Israel

Posted by Abraham Israel I at 1:44 AM No comments: