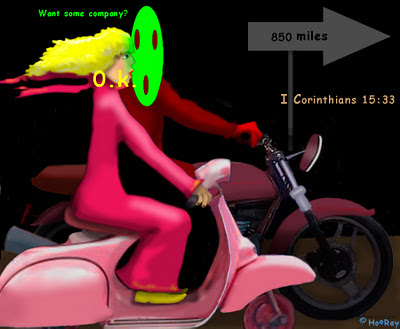 Ѧ℘☺﹩☂◎łḯ¢ €ϰ℘øüηḓ : From my childhood days I am born and brought up in a Pastor's family where my parents have always tried to keep word for word from the Bible with great zeal. Even when I was a little baby, the first thing my mother taught me was to say , "...While we were still sinners, Christ died for us." So when I was growing up, we used to refrain from attending schools and buying anything from shops even for groceries on sundays, avoid movies and theatre even when the school takes all the children to entertain them, attend the Church and not miss it for any reasons even if any exams by chance come on that day which is very important to ones career, etc... So I was carrying on externally well until the time came to join my polytechnic college. I was sixteen at that time. There when I joined, I saw people valued the values which are totally opposite to what I believed.
Intially in the first year I had good friends who were worldly in their thinking but were good academically. And one day while going to attend a lecturer's marriage, all of them wanted to go for a movie in the night, so without resisting it I went to accompany them. Even some of them who knew me that I have never seen any movie inside a theater in my life, surprisingly asked me about it, but I just smiled and said 'I do see now.' Soon I thought that it is not at all wrong to go and see movies in the theatre. Even my dad one day told me that he would stop being a preacher and teacher of the word as I have been a bad example to many people, but that didn't bother me a bit but only made me to do all those things secretly. The world became so tempting to me, finally I thought that being a bad boy in the class is the most fashionable thing. What a deception of the devil! But I didn't realise the foolishness of it at that time, so I began to cut the classes and go to many different cinema theatres. My attendance hit the rock bottom and everybody began to see me as a real bad-boy. It is just by the grace of God that I did not get dropped out of my college. As like me coming from a zealous Christian background is good, but the enemy of our soul knows how to make us remove the hedge that is around us with out knowing its value.
But thank God for godly parents, they tried their best to make me understand and stop me from going to such extremes. Once in the afternoon I told my mother that I am going to my friends house and rushed up to see a flim in the afternoon and came back after the show was over in the evening at five. Mother knew very well that I had gone to the cinema theatre. But she never asked me why at that time. Instead my parents prayed for me toward God to keep a supernatural hedge around me like the man of God Job did (Job 1:2-5, 10). I thank God for such prayers because, when the bad friends tried to teach me to smoke, I puffed up for a couple of time and then got irritated to such an extent that I did not want to smoke again. Again I got mocked by the bad company and I again tried to smoke but the same result happened. I really praise God that the effective prayer of righteous people like my Dad and Mom had availed much to stop me further from going in to it (James 5:16). Still I went further in to seeing movies that were immoral and erotic. My mind began to be filled with the gutter and sewerage of the worldly lusts. Soon I lost that childlike thinking that I enjoyed mostly all through my early teens. Little did I realize what I did would take many many years and great chastisement from God for me to come back to Him. Thank God I did come back to Him years later, but wasted years have been wasted forever. I want you to resist the temptation when the world tries to conform you to its whims and fancies. The one mistake I did in my teens was that, I did not allow my mind to be renewed by the word of God in order to be transformed daily during my teen years (Rom12:2), instead my religion was more legalistic to be conformed to my traditional upbringing. So I became a hypocrite and finally lost my precious time in my teen years which could have been used for God. WHEN WE TRY TO CONFORM OURSELVES TO THE WORLDLY PEOPLE, ALL OUR GOOD AND GODLY MORAL HABITS WILL SOON BECOME CORRUPTED TO THE EXTENT WE WILL BECOME USELESS TO GOD AND HIS PURPOSE. I pray that the Lord might help us all in the coming days to renew our mind daily with the word of God and be transformed day by day in to the likeness of JESUS OUR LORD! May God help us to choose friends whom He brings by divine appointment, who will work with us to fulfill His divine purpose for our lives. May God help us not to choose friends by our fleshly decision to please our own self, who will take us further and further away from God and His purposes for our lives. May our life be a sweet fragrance to our Heavenly Father who has loved us with an everlasting love.
MuCh BlEsSiNgS....
•÷±‡±( www.apostolicrevelation.blogspot.com )±‡±÷

Posted by Abraham Israel I at 6:32 AM