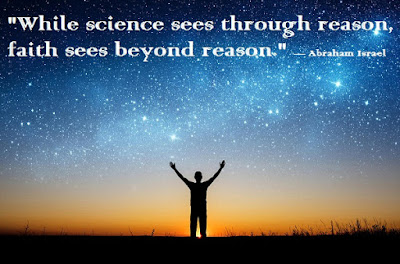 Å℘◎﹩☂øł☤ḉ ℚυ◎тℯṧ :
"If you can only believe what you can see, then most of the things you do not see in the world but can only be felt by the heart needs to be explained away as nothing, such unbelief will cause you to become blind to spiritual realities of life as what exists came out of nothing in the beginning of time. So something cannot come out of nothing, unless nothing can come out of something. If God exists as somebody behind that something in the beginning, he has promised to bring nothing out of that something by His power in the end of time. When you will see the world destroyed by fire at the end by God, what you consider as something will become nothing but a gas which you cannot see. If we believe, faith sees the invisible something now. If not, unbelief sees nothing behind the invisible something now and will also no more see the invisible something then!" — Abraham Israel

"The beauty of life is seen and felt only by those who forget what others think of them, and instead learn to appreciate the Creators beauty in His intricate handiwork." — Abraham Israel

"Our inner turmoil in our spiritual life caused due to our old man will end only when we die and go on to be with the Lord, but do not trust in him now everyday you live or believe that he will become better because he is still a rebel who hates God and wants to only please himself. Instead feed on the new man who is made in the image of God, so loving and obedient to the voice of God. Both of them never go together, and will act contrary to each other. Keeping feeding the new man with the Word of God, Spirit of God, Prayer, Songs, Joy of doing Good Works, etc...soon you will see a powerful activity of the new man bringing the power and presence of the world to come in to this mundane present world to demonstrate and give a continual foretaste of our Heavenly Kingdom to which we belong for the Glory of God! Believe you will, and you will win." — Abraham Israel

"Stop being angry at yourself for your failures, because God's hidden purpose has been hidden in it all. It was God who allowed failures, so that when you fall perfectly down on the mat, you come to understand how frail and weak you are to carry on without God's help and come to lose your confidence in your self. But gain the confidence that God holds you even when you fall and fail and fail and fail. Thus it was God's idea to keep pride away so that you are protected to fulfill the good destiny of God which only He can fulfill when you humbly follow Him. Failure in itself becomes a stepping stone of success, for all those who realize that God is the one who designed it so that we could lean always on Him to stand by His power as beloved children of God!" — Abraham Israel

"Hell has one big Broadway entry ruled by the deceptive trinity called as self, sin and Satan, and majority of the people in the world walk in this way which has no exit forever and ever. Heaven has one Narrow way entry ruled by the true Trinity who rules it (i.e.) Father the Source and provider, Son the Salvation manager and the Spirit the sustainer executive, and few who choose to lose themselves by repenting, turning from sin and who take up the cross of Jesus Christ to desire to become like Him will never miss this blessed bliss and tranquility which also has no exit but one entry to remain there forever and ever. Those who end up in hell, end up there by their conscious choice of walking in whatever way they want and cared enough to please only themselves while on earth. Those who end up in heaven also end up there by knowingly choosing to believe in Jesus Christ and follow Him in spite of losing their will to be ruled by Him. Remember, God desires all of us to repent and be in heaven with Him and that is why He sent His only begotten Son Jesus Christ to be born on earth, live a sinless life and die for us to rise up at the end to justify us and takes us to heaven with a eternal guarantee of salvation. Be saved and live forever eternally!" — Abraham Israel
-~*'¨¯¨'*•~㊅[ www.apostolicrevelation.info ] ㊅~*'¨¯¨'*•~-

Posted by Abraham Israel I at 3:45 AM No comments: