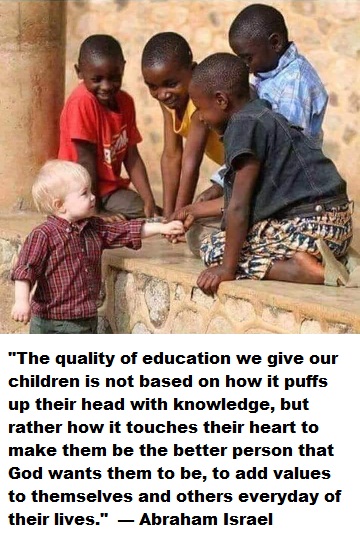 
"Humans are humans, monkeys are monkeys, there can be no in-between because while humans are made in the image of God, monkeys are made in the image of a monkey. In other words, a monkey can only relate to another monkey at the highest level and identify itself with its peer, humans can look to God as one among them in Christ Jesus and relate to Him at the highest level." — Abraham Israel

"God reveals Himself to every human in various ways which if he continues to neglect, cannot give a reason to God for not finding Him personally which is salvation at the end of it all. This life with all its complexity of puzzles that cannot be solved, needs no better answer than God Himself, as the very intent for it all is to find the problem solver rather than the unending answers which is only philosophical and theoretical until it all ends in a personal relationship with the Creator of mankind through Jesus Christ. Earthly life in itself is a education and a temporal school of God, which is given by God to get humans prepared for the permanent life to come in our afterlife. Those who get a pass mark and above are in for a eternal treat, while those who get failed in it because of their lethargy will only have eternal regret to retreat in themselves for their foolishness of despising all the chances that God gave again and again in their earthly life to get saved from sin to receive eternal life. While the minimum pass mark stays as a belief in Jesus Christ, the good scores and percentages of distinction comes with the various levels of dying to self life and living to God in Christ Jesus! You cannot lose on earth for somethings that you can only gain for eternity." — Abraham Israel

"True spiritual power is revealed through our lives only when we come to the place where we know that we have all the power to do anything we want to defend ourselves, yet we restrain ourselves by the power of the Spirit, so that we do not defend ourselves but allow God to use His Power to defend us and take vengeance for us to justify our cause in His way, in His time and in His pleasure. To every child of God, holding Great Power comes with a great responsibility of being tested by God now and then to show to all whose Power it is, so that God might be honored through His children and be glorified for eternity! Defend everyone except yourself when you operate with God's power, because at the end of it all, God defends those who do not defend themselves, but choose to give that responsibility back to to the Heavenly Father who watches over them and protects them all the time." — Abraham Israel

"You cannot trust God more than you trust His Word. His written Word of the Old Testament and the New Testament is the foundation of learning to trust God, and upon it with the same Word, superstructures can be built without limit for the Glory of God. Even to the people who never have come to receive the written Word through a person or were totally ignorant of its existence, when God speaks to their heart, it becomes written in their heart for them to trust Him." — Abraham Israel

"God considers your trust in His Word as equivalent to the trust you have in the personal integrity of His dependable character, and He become a shield to those who trust in Him." — Abraham Israel


Posted by Abraham Israel I at 9:24 PM No comments: