Today's Bible Verse To Ponder Over:

God Suffers Long Because He Is Love! 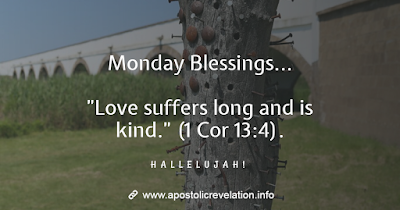 Today's Bible Verse To Ponder Over:
"Love suffers long and is kind." (1 Cor 13:4).
God is Love. That is why He chooses to suffer even when he finds that we sin and cause much suffering to Him. The God of the New Testament does not overlook sin while the God of the Old Testament punishes sin. God hates sin, always he has and always He will. He is infact is angry at the wicked who chooses to sin without repentance or regret for his bad and evil behavior. Our Father in heaven, the Son of God our Lord Jesus Christ and the Holy Spirit were the same God in the Old as well as the New Testament. But the only difference between the two Testament is, in the Old God demanded through Law, in the New Testament God gives grace through Jesus who are ready to humbly acknowledge that they cannot keep the law with out His help.
There was a father who wanted to teach his son how serious sin is, he told his son that whenever he did any sin, he can go to a particular tree on the corner of the house and in it he can fasten with a nail for each sin and go scot free without any trouble or punishment from the father in the home. So the son used to fasten nails day by day, more and more, and was let go for it. He soon started to see the tree filled with more and more nails, that when time went by he became curious to know where to fasten the nails further if the tree will soon get filled up full of nails. As he was tensed up a little and was in deep thought about it, all the while Father has been watching all the works that the son has been doing all the while. Never did the Father show his face in anger when the son sinned, but rather he continued to love his son and taught him regularly the Word of God to let him grow up to know what is right and wrong, and how to be responsible and live a blessed life.
On a particular day, the son was very serious and tensed up to be in deep thought about something which bothered him, on that particular day he found that the tree had no more space to nail even a single nail upon it. Having know in the past that only nailing it on the tree can make him go scot free for his sin, he tip toed down the hall way to his father who was in prayer at that time and asked him where to fasten the nail as there was no more space on the tree. Slowly the father raised his face in deep sorrow of heart, and extended to his son the palm of his hand and told him to fasten the nails further more on it. That was the day the son broke within and understood how much his father has suffered all the while when he was still sinning day by day. Then the Father shared the Gospel with his young son and led him to the Cross to repent of his sins and receive forgiveness from the Lord for all the sins he has ever done to receive mercy and grace from the Lord. The boy became a great preacher and teacher of the good news of Jesus Christ to lead so many souls to the Lord in his generation because he understood the suffering and pain that sin caused to the heart of the father. Let us consider the kindness and the severity of God! Kindness to his children who repent, severity of his judgment for sin for those who harden their heart towards Him.
Let Us Pray Saints: Dear Heavenly Father, I thank you and praise you for saving me from sin. Sorry for the pain my sins have caused to your heart. I come to you with a broken heart to tell you how much I feel when sin overcomes me, help me overcome all the besetting areas of sin that has caused suffering to you. Thank you for your love which you have showed towards me in Christ Jesus, through whom I stand by grace to receive your mercy newly day after day, morning after morning, it has not failed at all. Bless you greatly for your benevolency from the bottom of my heart, in Jesus mighty name I pray. Amen. Hallelujah!
Much Blessings,
Apostle Abraham Israel
"If it is a serious offence to sin before God because it causes Him to suffer, then to repent of it is much more serious business before God inorder that we may live a life pleasing to Him in Christ Jesus and bring joy to His loving fatherly heart." — Abraham Israel
- - --^[ www.apostolicrevelation.info ]^-- - -

Posted by Abraham Israel I at 6:25 AM No comments: 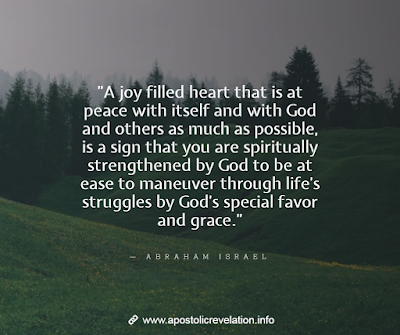 
"God is love that is why He is kind and gentle even we are not toward Him. In other words, God perfect love for us make him suffer long until we completely make a about turn in matters of sin that made Him suffer for long. God acts as a loving Father towards his son, he chastises and yet in the midst of it He shows his mercy and grace day by day. He know that we are dust, that is why He purifies us until we become the gold that He can boast about for eternity ahead! Give in to God and He will never ever give up on you. Glory! Hallelujah!" — Abraham Israel

"Man's goodness does not just depend on moral excellence, it instead is based on how well He connects with God and chooses to stay in Him who is the one and only Good without a shadow of turning!" — Abraham Israel

"Peace can neither be received nor be maintained by information, but rather by depending and meditating on the truth by faith, waves of inspiration from His Spirit can calm our soul and keep it intact in the peace of God that passes all our natural understanding. Peace is God reminding us, saying, no matter what happens, I am with you and in control of your situation!" — Abraham Israel

"When all the sacrifice has been done and there is nothing more to offer except our heart, the fire from heaven will suddenly descend upon the living sacrifice to burn over it and yet not consume it for the Glory of God! This is what John Wesely described saying, 'I set myself on fire and people come to watch me burn.' May we light ourselves on fire with this holy passion in the same way and bring great glory to God in our generation!" — Abraham Israel

"God needs no other sacrifice now, than to give ourselves as a holy living sacrifice within the will of God." — Abraham Israel

Posted by Abraham Israel I at 5:49 AM No comments: