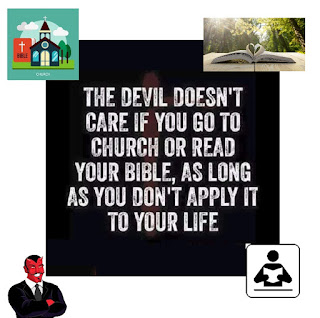 Å℘◎﹩☂øł☤ḉ ℚυ◎тℯṧ :
"Devil is concerned that you should only hear the Word of God and not believe it, God is very much concerned that you not only hear the Word of God but believe it and do the works of righteousness which works as a natural outflow of believing, which is doing by the outworking of God without striving because of God in-working in and through us. In other words, when you hear the word of God and believe, you are allowing God to work in, through and upon you to work a work in our life and times, and that which pleases God. God works to please Himself through us when we believe! And only God has the power and ability to please Himself in his perfection, and we as his children become a conduit of his ability to work to please Him when we surrender our lives by faith to Him who works all things for His Glory!" — Abraham Israel

"Work in itself is not a worship, but it becomes one when it is done by faith towards Him!" — Abraham Israel

"A Bible that is worn out is a sure sign that the life of Jesus imparted in to the reader will never be worn off, but it will begin as a fountain to bless him abundantly initially and will increase and increase to become a river of blessing to bless many around him supernaturally. Truth sanctifies, but lies desecrates us. Truth honors us with its blessing, lies dishonors us with its curses. Speak the truth and stand for it even when it means you need to stand alone, because when you evaluate yourself at the end of your standing for it, you stand on the side of majority with God, and those who stood for lies will become a minority without Him by that time. Truth may hurt initially, but it blesses us eternally. But lies may comfort you falsely for sometime, but it hurts you eternally. Never forget that God stands with those who stand for His truth!" — Abraham Israel

"It is not change of religion, but the change of domain that brings freedom and liberty to our soul eternally. A bird alive and fed in a cage is what religion promotes, a bird in the air fed by the Father in Heaven daily day in and day out, protected by Him so that not even one falls to the ground without his will in His Kingdom Domain is what He provides. He who rules the Universe also chooses to rule our hearts when we submit to His authority willingly as His dear Children in the Kingdom of His dear Son Jesus Christ, He lavishes His gifts on each of his children individually to make them experience His kingdom power when we continue to love Him and live for Him wholeheartedly! Religion is man's idea about who God is or will be, Kingdom of God is God's idea about what man should be and become. The Kingdom of God rules over the entire universe in reality of existence, religion tries to replace it and rule over the world of people. If people come to realize the need for Kingdom after they die physically, it will be too late to enter God's Kingdom. But if they realize their need for the Kingdom now before they die physically, it is never too late to inherit it by believing the stipulations of it to abide by. Kingdom of God only rules over those who willingly allow themselves to be ruled by its power and authority!" — Abraham Israel

"A human can be the poorest of the poor, yet can be the richest of the rich in faith. Riches on earth is no indication of our spirituality, and also being rich doesn't mean a person cannot be spiritual at the same time. By equating asceticism with spirituality is also equally wrong, when the fact of the matter is, where their heart is set, that is where their treasure is, whether in heaven with God by working towards spreading the gospel of God or on earth collecting treasures for themselves and their own family. We cannot love both God and mammon at the same time, we can only choose one and reject the other which will control our thinking and life. It is a wrong human thinking of associating riches with the favor of God in one's life and family which has ruined the lives of many a Christians to live a dead life towards God, and it is never a Biblical thinking of the New Testament times, but rather is a religious thinking which Jesus clearly spoke against to make people understand that being rich or poor has nothing to do with God rather it is sin that caused such imbalance and injustice in the world. The gospel is a sword of God sent to operate the mind of man to restore him from wrong thinking of religiosity, so that he may understand that God now wants all humans to become good stewards of all His riches on earth, as all belongs to God who has given them whether little or much. That is why whether poor or rich, the Lord has told all the saints of the New Testament to seek first the Kingdom of God and His righteous way of living, and all the needs that are needed will be provided to do the will of God and fulfill the destiny that God has for them in His plans and purposes. Jesus is the only one in the whole world who has given a solution to all the injustice of this world, and He will come again with His Church saints to rule the world and demonstrate God's justice to the world for a thousand years time on this same earth. Make sure you are looking forward to the exciting times with God and be a part of the greatest adventure to experience in the days to come by now living for Jesus Christ!" — Abraham Israel
-漫~*'¨¯¨'*•舞~ www.apostolicrevelation.info o ~舞*'¨¯¨'*•~漫-

Posted by Abraham Israel I at 7:59 PM No comments: