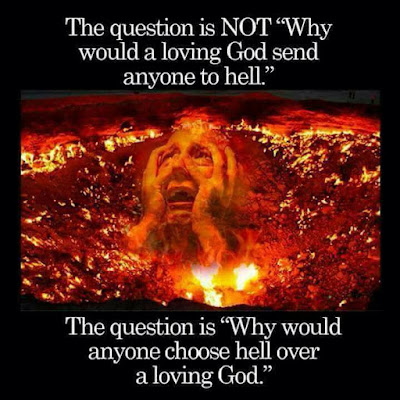 Å℘◎﹩☂øł☤ḉ ℚυ◎тℯṧ :
"Hell was not made by God for humans, but actually it was made for the fallen angels. But then when humans fell in to sin and rebellion against God siding along with the fallen angels in their natural state, God gave man the choice to continue to live in the fallen state as fallen humans to go to hell by their own choice, and accompany the fallen angels in hell without God and his goodness, or repent of sin to be saved by believing in Jesus Christ and choose to be in heaven with God for eternity ahead enjoying his goodness along with His intimate friendship to serve Him. Heaven and Hell is a choice, do nothing in this life to seek God and you will end up in Hell fire without Him. Seek God now and you will be saved to end up with Him now and forever in Heaven!" — Abraham Israel
"Using the scale of prosperity preaching and teaching of health, wealth and success to use it as the standard for measuring our spirituality is not only injurious and detrimental to the growth and health of our spiritual life, it also leads us in to deception of covetousness and greediness which pierces those who are deceived by it with many sorrows, and even has the potential to cause ship wreck in ones faith. The gospel of the Kingdom is in itself is a prosperous good news both for rich but poor in spirit and poor but rich in faith. To make this heavenly gospel of faith, hope and love to become a earthly one, is to misinterpret it for one's own and their followers destruction. So be wise saints to avoid all extremes of twisted deceptive doctrines of the end time, because God has given us a responsibility to grow spiritually and rightly divide the word of truth as His sons and daughters of God, and believe it to live in the true unadulterated doctrine that accords with godliness that further leads to contentment in this life based on the promise of the life to come for the Glory of God! Gospel is good news for spiritual construction when it is witnessed correctly, or it becomes a dead news for destruction when the motives behind it becomes adulterated." — Abraham Israel

"If we choose to reject the passing pleasures of sin, world and self, but rather choose to suffer affliction with the people of God now, the temporal pleasures of life becomes dim enough to make way for the eternal pleasures to break forth and shine upon us to be be enjoyed on earth as it is in heaven through the revelation of God's Presence. God's enjoyment and pleasures that He gives to exclusively His children and sons and daughters, can only be experienced on earth and forevermore as we look to His right hand where Jesus sits as the most merciful and compassionate King of kings of the entire universe. Only Jesus can give us true righteousness, joy and peace to inherit heaven on earth itself which is the evidence of living in the Kingdom of God!" — Abraham Israel

"Unity without liberty makes a statue out of humans, but unity in the midst of liberty, equality and love for one another makes humans to salute the statutes of God ordained government in remembrance of God given rights to exist and prosper the diversity in unity, and not contain and restrict the diversity through fear in the name of unity." — Abraham Israel

"Storms of life can hurt us if we focus on what has happened to us overtime on the outside like being lied, betrayed, back stabbed by those who have deceived us to destroy us, but it can be the greatest blessing if we can only focus on what has happened on the inside of us through the storm to prepare us to face life with a brand new perspective of heaven that has brought the sweet voice of the Lord to be heard by us through building a open heaven within us through breaking us, melting us, molding us and filling us with Himself for the destiny God has for us ahead to fulfill in His will and time. Storms thrown out the dust and all the unwanted things out and always without fail leaves behind all the unshakable Kingdom riches for us to enjoy for eternity ahead! Rejoice that if you have not faced the storm, you would have wasted the storm that God had sent to build you up and make you a blessing to many!" — Abraham Israel
☠•´¯`•.¸¸.ஐ [ www.apostolicrevelation.info ] ஐ..•.¸¸•✞

Posted by Abraham Israel I at 9:18 PM No comments: