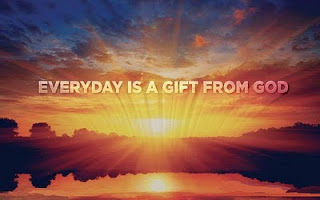 Ѧ℘☺﹩☂◎łḯ¢ €ϰ℘øüηḓ : Whether we believe it or not, each day is a gift of God that he has given to all humans personally to enjoy it and find the person who has created it all. When the sun peeps its head out of the high rises of the cities or out of the beautiful woods, it is like God saying, 'Good Morning' to all of us personally. When you hear that bird chirp beautifully in the morning, it is like God saying to you, 'My dear, don't you want to hear the voice that created all these melodies of birds just for you?' When you hear that thunder on that sky or the stormy wind which nearly blows your mind away, God just says to you, 'Don't you want to know me who controls the whole earth day after day, night after night without letting it go out of control, the God who is keeping you safe from your childhood days.' The Apostle Paul beautifully expresses and agrees with our above discussion by saying, "20 For since the creation of the world His invisible attributes are clearly seen, being understood by the things that are made, even His eternal power and Godhead, so that they are without excuse, 21 because, although they knew God, they did not glorify Him as God, nor were thankful, but became futile in their thoughts, and their foolish hearts were darkened." (Rom 20-21). Once we are unthankful for the goodness of God, gradually day after day our thoughts become useless and ineffectual to sense God's voice out of creation, instead spiritual darkness starts to descend in to our spirtual heart to make it foolish enough to the extent of even denying God. This is the reason childrens are joyful and excited about life, their hearts are thankful for life. They are excited at even the small things that grown up people see as mundane and laborious. What is the reason? The spirit of children burns brightly with the light of God and starts to get dimmer and dimmer as they grow up physically in this sin tainted world which corrupts their thinking perpetually (Prov 20:27). This is the reason Jesus said that we should become like little children to truly experience God's kingdom benefits and his goodness (Matt 18:3) Again the great apostle Paul advices all believers to be babes in malice so that our minds will be opened by God to great spiritual depths of God's goodness which He has shown to us, so that thankfulness will begin to come out of us (1 Cor 14:20).

When that accident that had happened on that road which took away the lives of many people, but amazingly you were the only one alive to testify what had happened; It is God's mercies that had been revealed to you inorder for you to tell to others how God has saved you from that imminent death. I have been through many such times in which I could have died like any other person who have already died at the flower of their youth days which is unfortunately the wrong time for their lives to leave this earth. But God remembered me all those times of crisis and have sent His angelic help to protect this tiny little speck of dust which He loves so dearly and have given His only Son's life to save me from sin for eterntiy ahead. I remember it all to praise the Lord for His goodness. His goodness never ceases to exist even for one minute, but all I can say honestly why it is like that is because of living within His covenant through believing Jesus right from my early childhood days. Physical aspects of God's goodness usually reaches to the saved children of God and also the unsaved people of this world. But His children's remember it all to praise Him while the unbeliever forgets God's goodness that saves them from death and destruction. I choose to praise God today for all His Salvation!

We know that God is good physically to all creation because Jesus said, "44 ...I say to you, love your enemies, bless those who curse you, do good to those who hate you, and pray for those who spitefully use you and persecute you, 45 that you may be sons of your Father in heaven; for He makes His sun rise on the evil and on the good, and sends rain on the just and on the unjust." (Matt 5:44-45). If sun and rain ceases, all humans on earth will cease to exist. It is God's goodness that keeps all humans physically alive. Here Jesus is mainly asking all of God's children to exhibit the beautiful spiritual character of their Heavenly Father and shown it to the world which knows no such character due to acquiring a darkened and spiritually foolish heart, which again happened to them because of being unthankful towards God for His physical goodness shown perpetually towards them. In other words, the very reason God exhibits his goodness physically to all humans is because He wants all men to recognize Him and inherit his spiritual blessings and live forever with Him!! SPIRITUAL BLESSINGS ARE GIVEN ONLY TO HIS CHILDREN, WHILE PHYSICAL BLESSINGS ARE GIVEN TO ALL HUMANS SO THAT THEY MIGHT ALSO BECOME HIS SPIRITUAL CHILDREN. God is good to all so that they might understand Him and receive His character spiritually to bless the world as His children. Strive to get God's highest spiritual blessings and automatically his physical blessings will be given as a bonus to enjoy Him and be thankful to serve Him the rest of our lives on earth.

Å℘◎﹩☂øł☤ḉ ℚυ◎тℯṧ : "When people say God is good all the time, it means different things to different people. But in actuality it is absolutely true only to those who as God's children say it from the spiritual recesses of their heart." — Abraham Israel

"Every one knows about God intellectually, but only those who have know God spiritually are known by God intimately and personally as His children." — Abraham Israel

Ḡґℯαт ℚυø⊥εṧ : "God is not who you think He is; He is who He says He is." —Clarice Fluitt

"There is only one reality. That reality is God. The soul of man must contact God, and unless the spirit of man is truly joined to God, there is no such thing as real Christian manifestation." —John G. Lake

Posted by Abraham Israel I at 4:13 AM