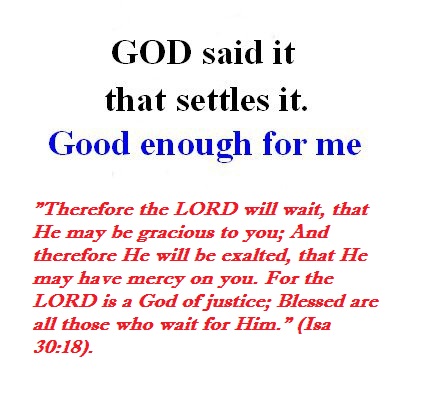 Ѧ℘☺﹩☂◎łḯ¢ €ϰ℘øüηḓ : Actually in context, this is a word of prophecy and blessing that Jacob spoke over His sons just moments before he died. When he actually spoke the prophetic word over His son Dan and how their descendants will be like in the end times. The content of the prophetic word is a prophecy that Dan will judge the nation as one of the tribes of Israel (Gen 49:16). Yet because of some strong prophetic rebuke succeeding the promise (Gen 49:17), it seemed that this tribe will cease to exist before God in the future. True to the saying, when John describes the tribes of Israel who will be sealed before the end time Tribulation starts, he left the name of the trible of Dan completely from it (Rev 7:4-8). Then the question comes up, then how can God's prophecy that they will judge his people as one of the twelve tribes can be fulfilled in the future Millenial Kingdom on earth?

The answer to this has been clearly given by God in the immediate next verse that says, "I have waited for thy salvation, O LORD." (Gen.49:18). In other words, God wanted them to trust in the promise of God to keep them safe even up to the time of His Millenial Kingdom and keep expecting from the Lord to sustain them through hard times. Exactly according to this promise, God added their name again in the list of the tribes in the time of the Millenial Kingdom which he gave through Ezekiel the prophet (Ezek 48:1-8, 22-29). Through the time of the GREAT TRIBULATION, even though the tribe of Dan will not be sealed on their forehead during the this time for a special protection to keep them alive, God will keep His Promise because all of them will wait for the Messiah to come and save them from getting extinct forever. God will keep on His promises and strengthen those who will look to Him through their tough times, till his appointed time will come to pass.

In our spiritual life, God saved us once and for all time when we received Jesus Christ as our Lord and Savior of our life. Then He sealed us with His Holy Spirit as a gurantee of keeping us saved till the day we will be resurrected in our BRAND NEW GLORIOUS BODY (Eph 1:13-14). But in between the time we are saved to the time we go on to be with Jesus forever, there will surely be times of great struggles that will come to us. During those times we should not look to ourselves but to God who strengthen us with His supernatural strength and who has also promised us that we who have come to Him for refuge in to His mighty hand will never ever be snatched out of it by any any demons, sin, sickness or even death (John 10:27-30; Rom 8:38-39). GOD IS FAITHFUL EVEN WHEN WE ARE FAITHFLESS TO HIM (2 Tim 2:13), BUT WE NEED TO ACCEPT THAT WE ARE WEAK BEFORE HIM IN HUMILITY AND LOOK TO HIS PROMISES RATHER THAN OUR FEELIINGS TO REACH THE DESTINATION WHICH HE HAS PREPARED FOR US. When we keep waiting for God's salvation we will sail through through the hurdles by God's grace with out getting in to any hidden snares of the devil and reach the destination safely. God only works for those who wait for him. Much Blessings.......

Posted by Abraham Israel I at 3:36 AM