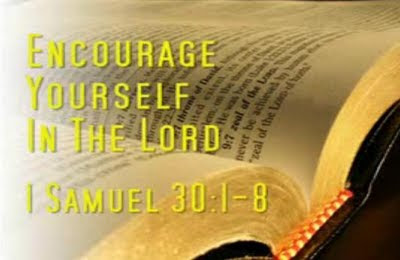 Ѧ℘☺﹩☂◎łḯ¢ €ϰ℘øüηḓ : Many times when we follow God passionately the devil will leave all others and will intentionally come against us to destroy and discourage us in our walk with the Lord. Nobody will beat a dead snake because it does not have the potential to hurt anyone. The deceptive snake Satan knows very much about it and will not bother to touch the powerless lukewarm believers but will try his level best to discourage those who are in love with the powerful God of the whole universe. King David as a young teen age boy itself was anointed to be the king of the nation of Israel by the one and only prophet of God Samuel himself at that time (1 Sam 16:13). But from that movement on David faced much troubles than any other person who lived during that time. But because he was in love with the God who gives joy and strength to those who trust in Him, he learned a wonderful habit that carried him through the rest of his life as a man after God's own heart. People say, "The Character of a man can only be seen when he is squeezed to the point of death." Surely this man David had a time like this in his life when he revelaed what He had cultivated all the days from his youth.

Because David went to the wrong place [i.e. Philistines who were God's enemies because of idolatry] to align himself and his troops in order to protect themselves, he faced this crisis of a lifetime in his life. When he returned back to the place where they were, their families and belongings were, they found that Amalekites who were also the enemies of God plundered everthing they had and carried everthing away and left that city burned with fire. Many of us may be going through the same path because of our disobedience to the perfect will of God. Here David and his men seeing this wept and wept until they had no strength left in them to weep any more further. In the midst of it, David was greatly distressed because the people who were with him as his men of war spoke of stoning him. Know this, when you are down and out, that is when Satan will try his best to destroy you through the ones who are dearest to you. The same people who are your followers on the good day will try to be your killers on the bad day when they see that they have lost everything they had physically because of one wrong guidance which was done foolishly even though unintentionally. When people lose everything that is with them physically, only those who are spiritual will have the confidence that they have a supernatural God within them who not only cannot be lost but also has the power to help them gain everything back. When David was distressed, he did not act madly in unbelief as the people who were with him, but he encouraged and stengthened himself in the Lord (1 Sam 30:16).

We need to encourage ourselves in the Lord when we face crisis in our lives too. Even when all the people who are with us fail us and come against us, we should not fail to strengthen and encourage ourselves in the Lord. IN THE MIDST OF this TURMOIL, David SOUGHT for THE WORD OF THE LORD AND HIS PRESENCE. Because of this habit of God's face seeking that he had already developed, ON THAT DAY David ATTACKED AND RECOVERED ALL HIS BELONGINGS (1 Sam 30:17-18). Dear saints, if you have lost God's peace, joy and righteousness because of the enemies trickery he has played on you, today's is the LORD'S DAY, ATTACK THE ENEMY OF YOUR SOUL AND RECOVER ALL THAT WAS LOST. GOD IS WITH YOU TO GIVE YOU A MIGHTY VICTORY TODAY. Blessings....